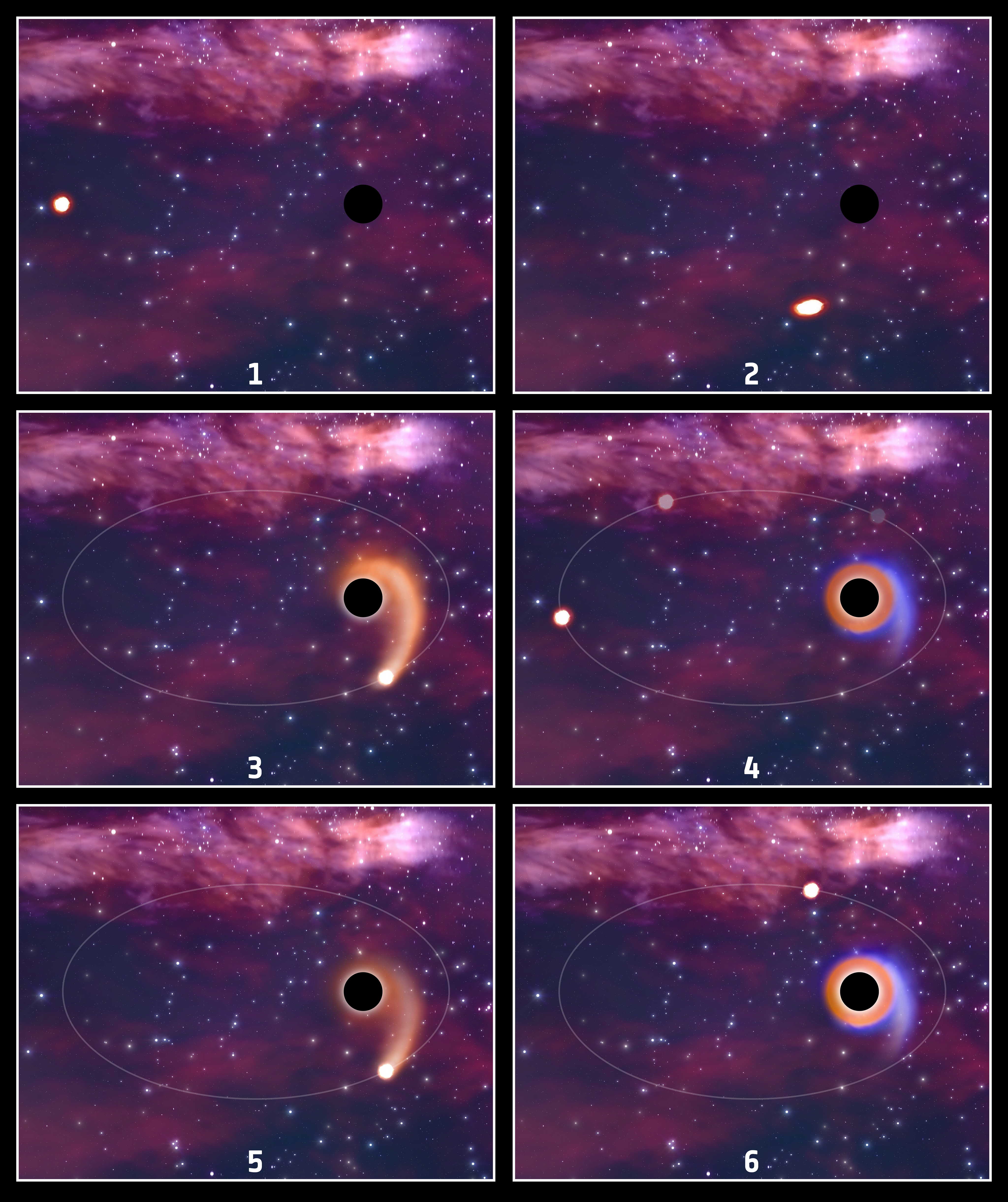 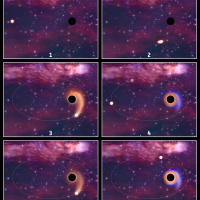 NEWS RELEASE — January 12, 2023 – Supermassive black holes lie at the centres of most galaxies. Their masses range from hundreds of thousands to billions of times the mass of our Sun. Despite this, black holes are elusive, trapping light and remaining hard to detect.

A hidden supermassive black hole can be uncovered when a star veers on a close approach to it. The star gets ripped apart by strong tidal forces, forming a disk of stellar debris on which the black hole is feeding. Energetic X-rays, UV, optical and radio light can be detected during this process known as a tidal disruption event.

Typical tidal disruption events exhibit a bright outburst of light, known as a flare, which lasts a few months during which the black hole consumes the star. However, two new flares with peculiar behaviour have been observed by XMM-Newton. These flares repeatedly shine bright in X-ray and UV light after the first outburst, suggesting that the stars have not been totally destroyed during the initial encounter with the black holes.

The studies led by astronomers Thomas Wevers from the European Southern Observatory, and Zhu Liu from the Max Planck Institute for Extraterrestrial Physics, Germany, reveal that part of the stars may have survived their first attack from the black holes. The X-ray and UV data suggest that parts of the stars are not entirely eaten up, continue their orbit and encounter the disruptive black hole again, leading to recurring flares. This activity is called a partial tidal disruption event.

The astronomers found repeated flares from two separate galaxies hosting supermassive black holes. These galaxies lie well beyond the outskirts of the Milky Way at distances of almost 900 million light-years and 1 billion light-years.

One of the re-brightening events, called eRASSt J045650.3−203750, was discovered by the X-ray telescope eROSITA on board the Spectrum-Roentgen-Gamma mission. XMM-Newton observations in 2021 and 2022 by a team led by Zhu found that the original flare was followed by repeated outbursts roughly every 223 days.

“The results from our first XMM-Newton observation were surprising. The black hole showed an unusually drastic dimming of X-ray light, compared to when it had been discovered two weeks previously by the eROSITA telescope. Follow-up observations with XMM-Newton and other instruments confirmed our speculations that this behaviour was being caused by a partial tidal disruption event.”

The other tidal disruption event, called AT2018fyk, was discovered by the All-Sky Automated Survey for Supernovae. It shone bright in UV and X-rays for at least 500 days, followed by a sudden dimming. In May 2022, Thomas and colleagues used XMM-Newton to study the dramatic increase in X-ray and UV brightness 1200 days after it first appeared.

Back to the drawing board

“At first, we were absolutely puzzled by what the rebrightening could mean. We had to go back to the drawing board to assess all the possible options to explain the observed behaviour. It was a very exciting moment when we realised that the model for a repeating tidal disruption event could reproduce the observed data,” adds Thomas.

A video animation of the partial tidal disruption event AT2018fyk depicts the model: A black hole repeatedly destroying a star.

In total, over five days of XMM-Newton observations were used to monitor the change of X-ray light coming from these sources. The extremely sensitive European Photon Imaging Camera on board XMM-Newton helped to study the hot material surrounding the black holes in great detail.

The teams making the new discovery extend worldwide – in addition to XMM-Newton and eROSITA, the studies involve other missions including NASA’s Neil Gehrels Swift Observatory, The Australia Telescope Compact Array (ATCA) and the Neutron Star Interior Composition Explorer Mission payload on the International Space Station. Collaborations allowed for these unprecedented cosmic events to be observed, modelled, and understood in maximum detail.

Some galaxies are constantly active, emitting flares as the supermassive black hole continually pulls gaseous matter into its orbit. The two new events observed by XMM-Newton, however, come from black holes which usually lie dark and quiet, until a star approaches. These events are the first time that repeated outbursts of light have been detected from inactive galaxies. The results of these studies are published in two papers in Astronomy & Astrophysics and The Astrophysical Journal Letters.

Both partial tidal disruption events will be monitored closely during the predicted periods of future re-brightening episodes to confirm the findings and make further discoveries. Observers may be met with silence, indicating that the star has been swallowed whole in the previous flaring episode. Turbulent times lie ahead for these events – and the hunt begins to find similar partial tidal disruption events. 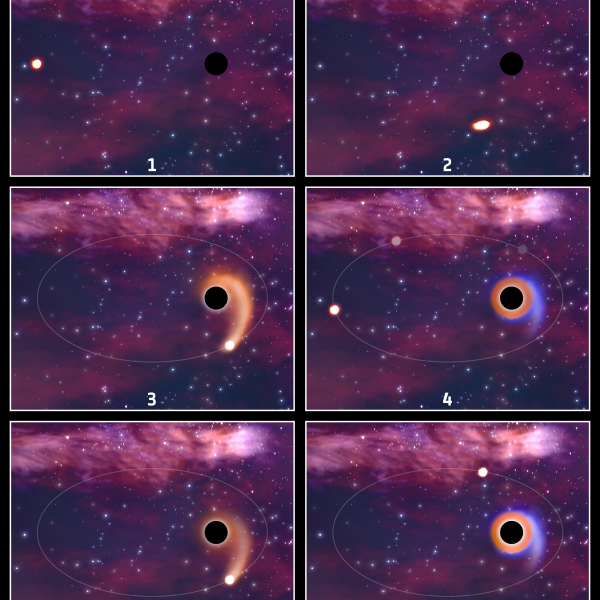