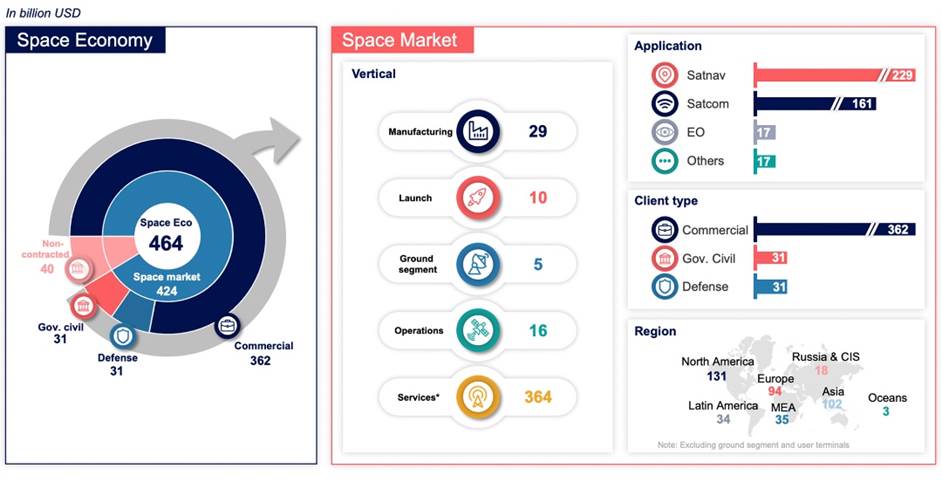 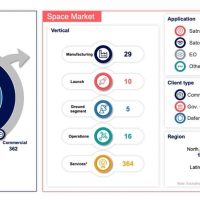 PRESS RELEASE — Paris, Washington D.C., Montreal, Yokohama, Sydney / January 9, 2023 – The fast growing commercial space sector enjoyed another year of significant growth and productivity during 2022, but did not escape unscathed from rising geopolitical tensions and operational challenges caused by inflation, high interest rates and the after-effects of previous years’ pandemic lockdowns on supply chains, according to Euroconsult.

The leading global space consulting and market intelligence firm estimates that the global space market grew by 8% last year and is expected to reach over US $737B within a decade. Their newly published Space Economy Report details the role played by various elements that make up the industry, with analysis broken down by verticals, applications and client types that make up the financial landscape of the sector.

As with previous editions of the report, the majority of the sector’s value (83%) is found in space-based end-user applications, an area of the space economy showing no signs of waning in the years ahead, covering telecommunications, Earth observation and companies utilising satellite navigation to deliver services to their customers. However, the firm deliberately breaks out the “core” space sector – organisations that make or own space assets – as a key focus, estimating activity throughout the value chain to grow from US $70B in 2022 to US $100B by 2031 with segments such as manufacturing, launch services and the ground segment driving this growth.

One of the most impactful consequences of the turmoil that impacted worldwide financial markets last year has been a risk-averse approach to investment into the space ecosystem. This point is underlined by Euroconsult’s findings that investment operations recorded in the last year have decreased by more than 10% when compared to 2021.

Euroconsult reports that industry investors are now focusing on cash-generating companies or early start-ups that require low levels of capital rather than higher risk investments into pre-revenue enterprises that occurred regularly in the preceding years. This has led to a slowdown of new investment into the sector and a move towards a more results-oriented approach in what remains a very competitive and agile market, with the average investment value dropping dramatically between 2021 and 2022 from US $71M to US $33M.

Conversely, the Space Economy Report also highlights the more positive financial implications arising from certain market trends, including numerous high-value merger and acquisition occurrences throughout the space value chain and increased government budgets for space technologies with more countries joining the sector than ever before. The public sector has also boosted private businesses, while planned satellite constellations have positively impacted the expansion of manufacturing and other supply chain activities despite temporary bottlenecks, particularly in the US and Asia.

“The ramifications of recent global events including the Covid pandemic and war in Ukraine continue to unfold, accelerating the transition towards more CAPEX-efficient, capable solutions in the context of intense competition and market uncertainty. M&A activity continues to thrive as the market demonstrates prevailing signs of consolidation that we expect to continue in the years ahead.”

The report, known primarily for its credible financial estimates, has come to set the industry standard for defining phrases such as “space market” and “space economy”, concepts that can often be convoluted due to the wide reach of the space sector across various verticals, supply chains and end-user applications, utilizing Euroconsult’s 40 years of trusted, qualified space research.

The report is pitched by the company as a consolidation of each of their individual space industry segment reports, uniquely placing significant emphasis and focus on the core value chain of the sector and covering ‘Upstream’ markets such as Manufacturing, Launch and Ground segment, as well as ‘Downstream’ applications such as Satcom, Earth Observation and Navigation. This results in a reliable source of information borne directly from a series of publications, with Euroconsult making a free extract immediately available at https://mailchi.mp/euroconsult-ec/speconomy.

Featured image: An overview of the space economy in 2022. Credit: Euroconsult 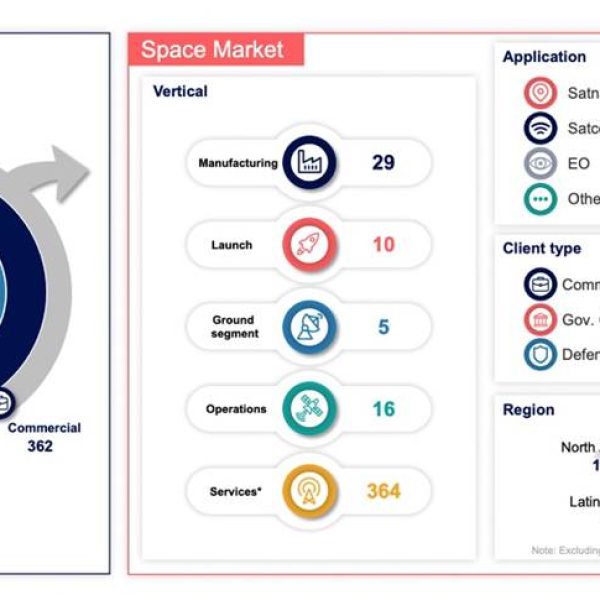