A Pinch of Iodine: New Space Propulsion System Gets First Demonstration in Space 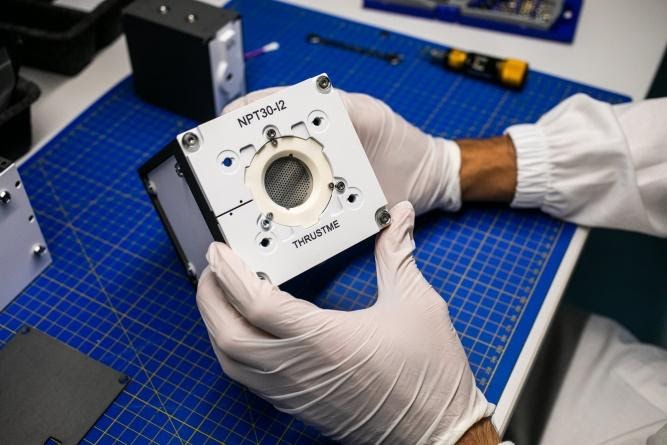 A Pinch of Iodine: New Space Propulsion System Gets First Demonstration in Space

ThrustMe has successfully tested its iodine–fueled electric propulsion system in space and published the results of the demonstration in  Nature, according to a statement from the company.

The company says that the experiment points the way to an iodine-powered engine as a viable alternative to conventional xenon propellant and that it could enable extreme propulsion system miniaturization. Iodine has been investigated as a possible game-changing alternative propellant within the space community by a number of universities, companies, and space agencies over the last 20 years, but no iodine propulsion system has previously been launched or tested in space, according to the company.

A miniaturized propulsion system solves a lot of problems that will prove vital for the long-term sustainability of the space industry, the ThrustMe team added. Small satellites could be given new maneuvering and space exploration potential, as well as provided critical new collision avoidance and deorbiting capabilities.

The ion thruster,  which is an example of an electric propulsion systems, are highly energy efficient, making the design an attractive alternative. In the paper, the scientists explain that diatomic iodine is stored as a solid and sublimated at low temperatures. A radio-frequency inductive antenna produces the plasma. High-voltage grids accelerate both atomic and molecular iodine ions to generate thrust. Substantial iodine dissociation can produce a highly collimated — which means it will only minimally spread — beam.

The team reports that “Since satellites have limited power generation capability however, electric propulsion systems typically use a propellant that maximizes their thrust–to–power ratio.”

Currently, the propellant of choice is almost exclusively the noble gas xenon  and krypton, although that is rarely used. This causes problems. For example, xenon is rare and, therefore, expensive. It costs around $3000 per kg), limiting commercial production.

Market projections estimate that more than 24 000 satellites could be launched within the decade and most of them will require electric propulsion, the company predicts.

“ThrustMe is pioneering the use of iodine within the space industry,” said Dmytro Rafalskyi, CTO and co–founder of ThrustMe. “Iodine is significantly more abundant and cheaper than xenon, and has the added advantage that it can be stored unpressurized as a solid.”

Xenon by comparison must be stored under high–pressure (typically 100–200x atmospheric pressure). Iodine also has a storage density almost 3x higher than xenon (and 9x higher than krypton). This enables significant simplification and miniaturization of propulsion systems.

“ThrustMe has developed a revolutionary propulsion system with an iodine ion thruster, the NPT30–I2, which includes all needed subsystems and fits within a single package of roughly 10 cm x 10 cm x 10 cm,” said Dmytro.